Thank you so much for your backings and support.  Over 400% funded!  What did I do to celebrate?

I got a delicious post-Kickstarter celebratory Icee 🙂

To keep you all updated on my progress, I created this:

As I finish tasks (or add new ones) I will be updating this board (notice the green filled in dots at the bottom) and letting everyone know.

I got the PiPlay case in my hands last night.  It looks and feels great.  There is only a minor alteration that needs to be done.

Everyone who backed a tier with the case will receive this version that has Kickstarter Edition branding.

Lots of cool work is being done on PiPlay.  Theme support is now built in, but it does have some quirks.  We are fixing that, and it should be part of the PiPlay 0.8 beta 4 release.

I got in a Bartop Arcade Kit from Rich’s Arcade today.  I am going to take pictures as I build it, and put that up as it’s own post. 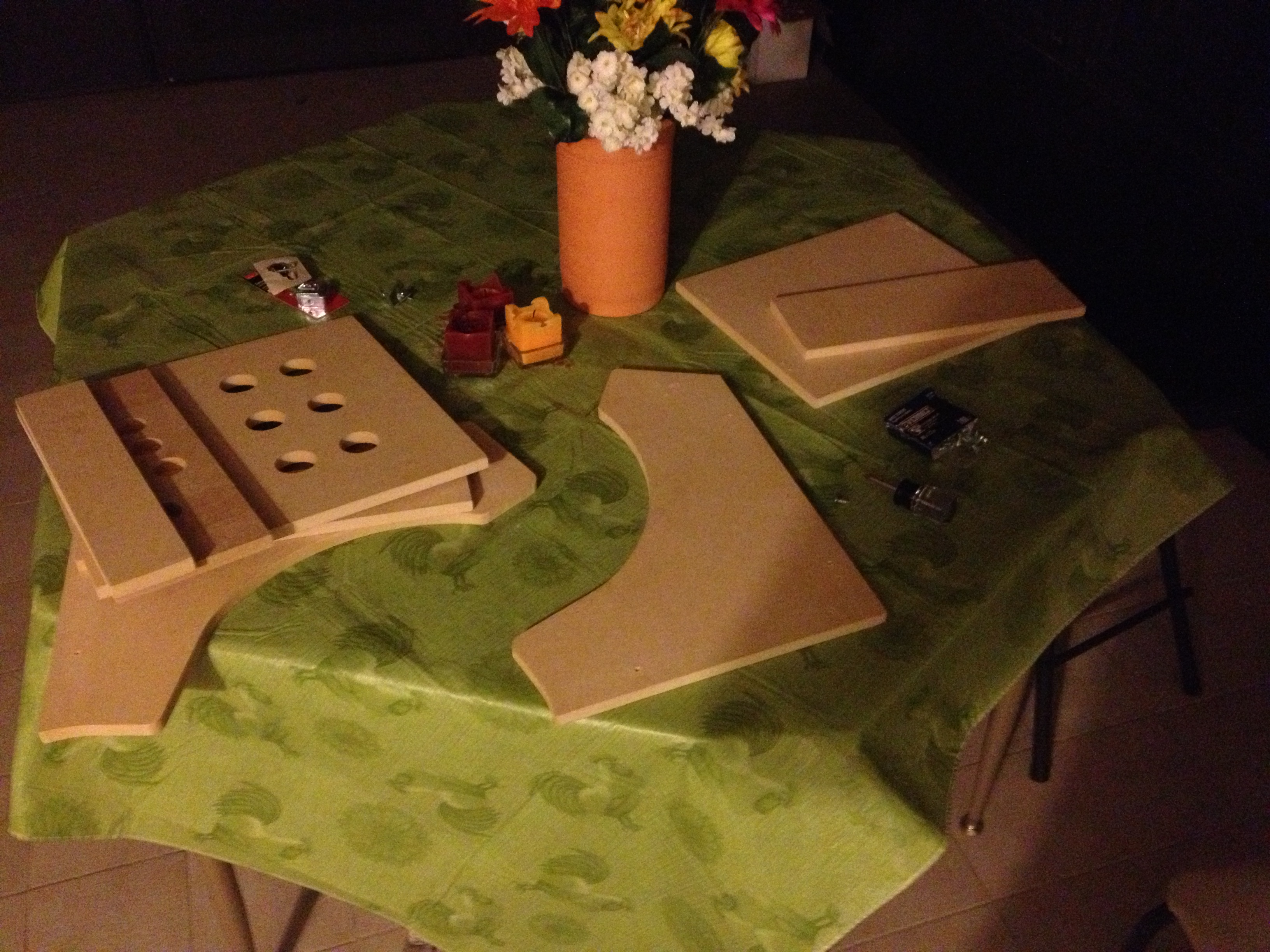 I’ve also started a joystick build so that I can test out different encoders easily. 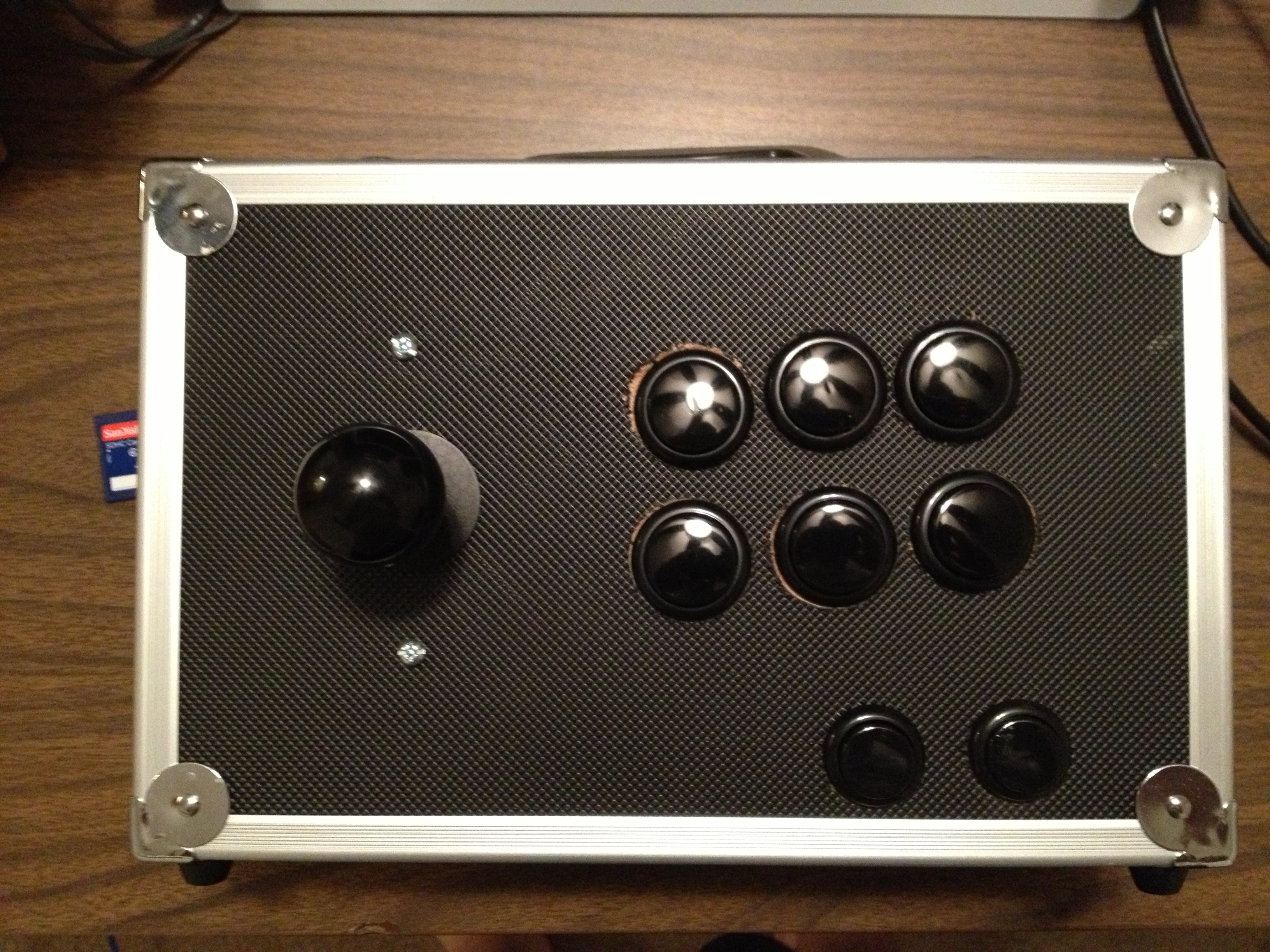 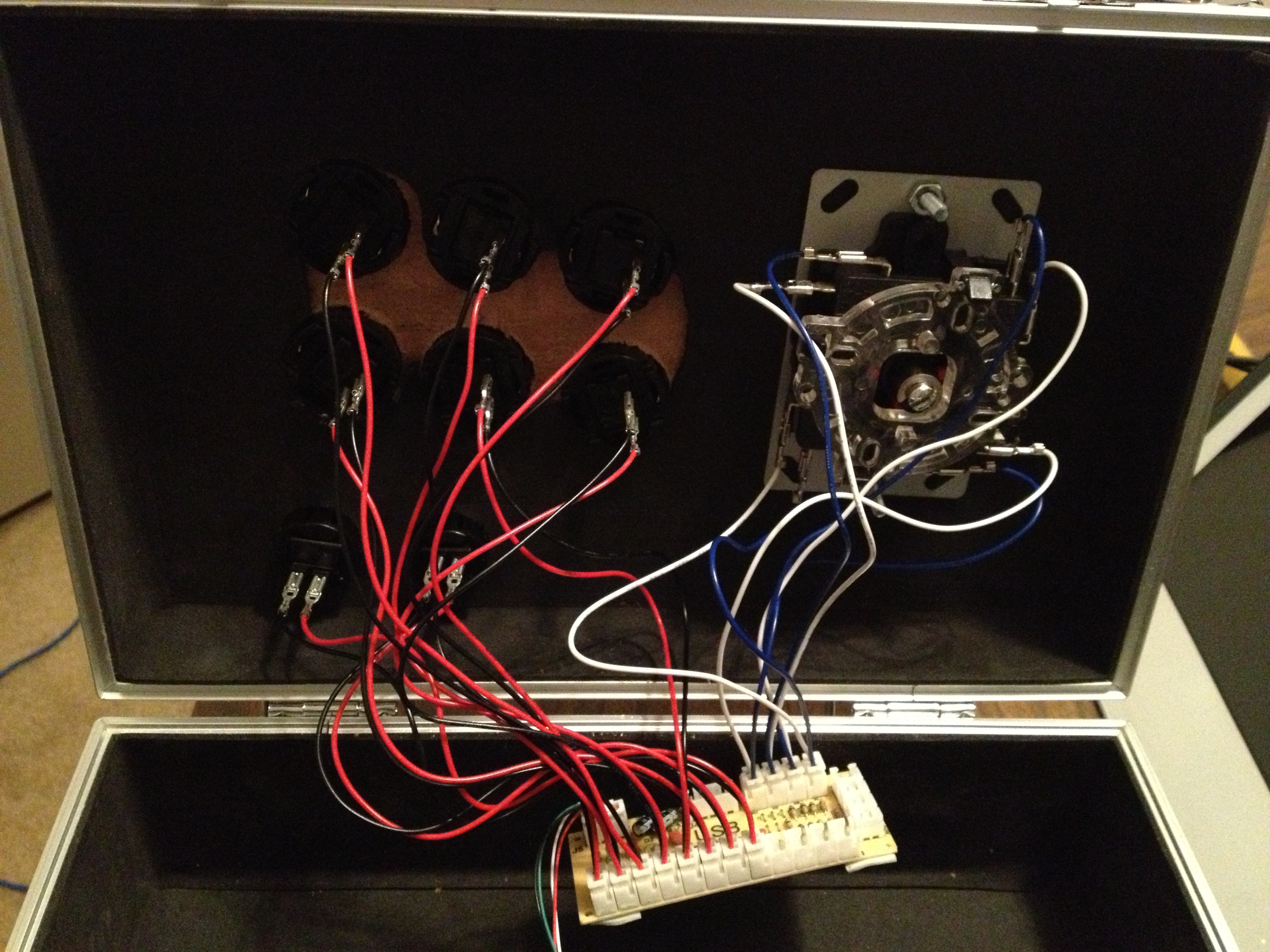 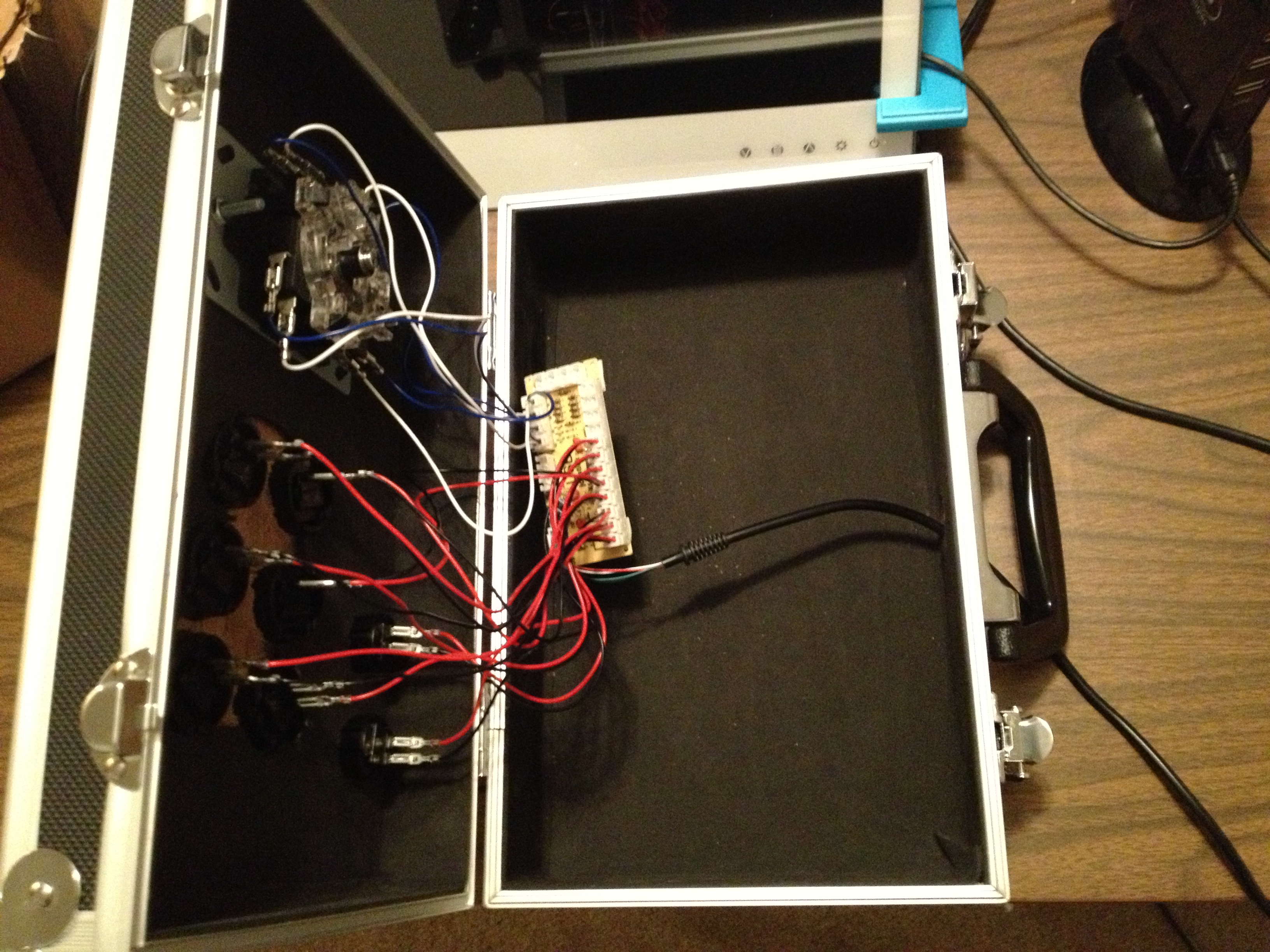 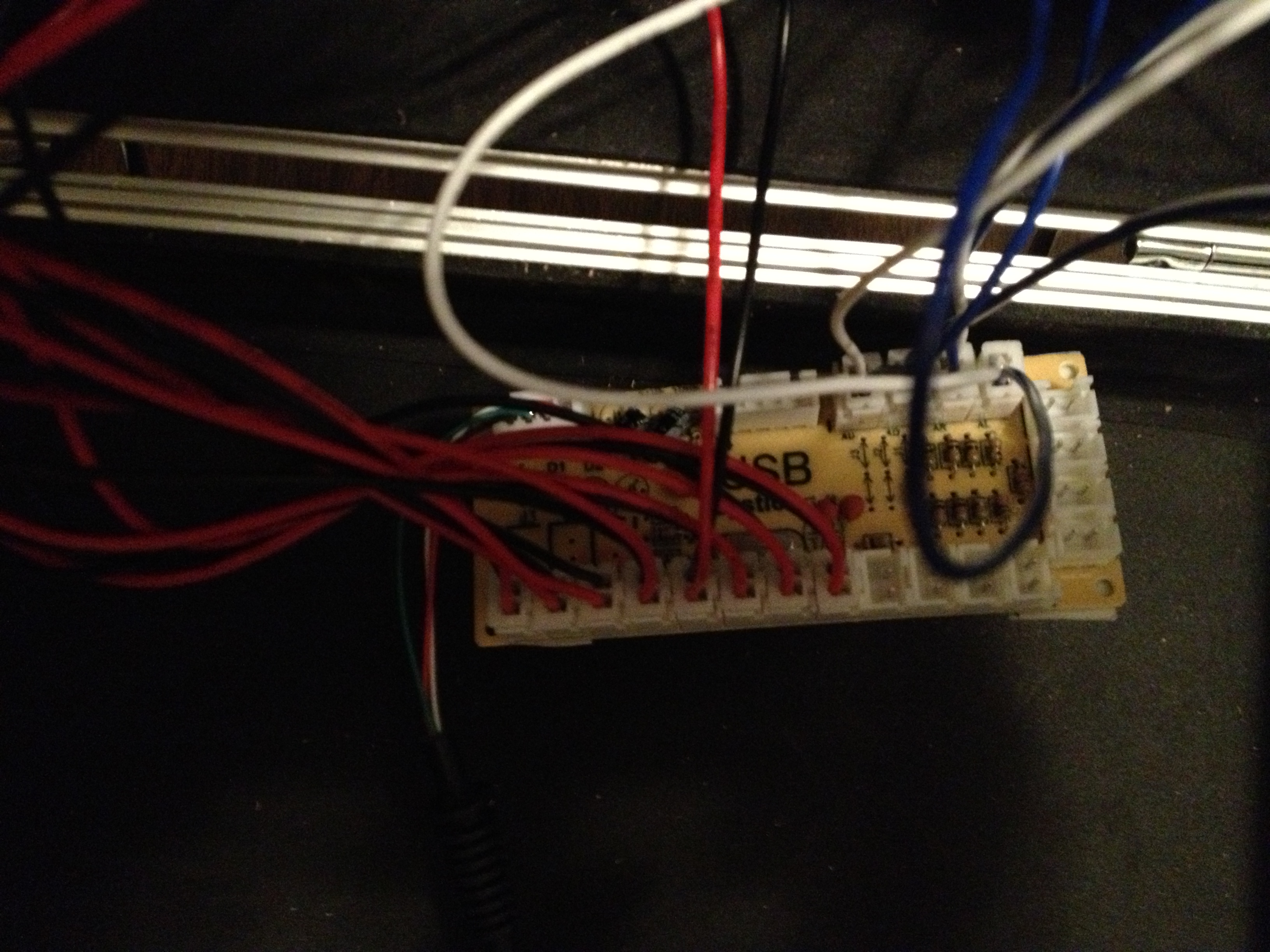 Custom menu from the PiPlay forums:

Just got back from a neat tech talk that was put on buy a bunch of alumni/coworkers.  Some very cool things were shown, like Google Glass and Wearscript.

11 days to go, and I’m at 298% funded.  This is crazy!  PiPlay 0.8 Beta 3 was release to positive results, and Beta 4 is being worked on as I type this.  A lot of enhancements, fixes, and some new emulators are being added to the distro.

I’ve ordered a few encoders which should be arriving by next week, and I can start implementing those into the software.

I was sent this link (http://iambuildingapicade.tumblr.com/) a few days ago, which chronicles the building of a Raspberry Pi arcade cabinet.  It’s really well written and highly detailed.

I’ve also started a mini cabinet build.  I purchased this kit and I’m looking forward to building it ( with all the extra time I have… /sarcasm )

It’s been two weeks and my Kickstarter is at 242% funded!!  This is incredible.  I’m so excited and humbled at the community support.  Thank you!

I am uploading the latest SD Card image of PiPlay.  0.8 Beta 3 includes:

What I’m currently working on:

Look for this SD Card image to be available tonight or tomorrow.  My laptop is locking up / freezing randomly and I’m trying to generate a more recent backup, so I have to hurry up and wait while that happens.

Hey All! I’m in Montreal right now for the annual PyCon conference.  I will be presenting  PiPLAY on Sunday during the poster presentations.  I’m excited to be showing off the software and getting feedback from fellow Pythonistas.

My flight in was horrible.  Finding my way around Montreal was horrible.  But now that I’m here and settled, it’s awesome!  The first day of PyCon has been interesting.  It feels a little disconnected since we are in a new conference building with multiple floors and the hotels are seperated.  The previous ones in California were all connected and on one main floor.  Either way, I’m having fun and the talks are good.

I have had to change the name from PiMAME to PiPlay.  As I stated in the Kickstarter update, it has come to my attention that I am possibly violating the trademark(s) of the MAMEDev team.  This is something that I never meant to do, as I have nothing but the utmost respect and awe for the team that develops MAME.

PiMAME has evolved past just MAME, and it is a perfect time and opportunity to update it.

I will be updating all the names once I get back from this conference.

Thank you all for the all the support and help.

PiMAME is now up on Kickstarter!!!!

This will help me purchase new joysticks, encoder boards, and all the other things that I need to test with to make PiMAME even more awesome. Thank you all for helping me to make it this far.

You all know I’m a huge Kickstarter fan.  This week has proved to be an awesome time for projects (and a sad day for my wallet).  Two projects caught my eye, the first one is the 3Doodler.

The 3Doodler is a hot-glue-gun like device that uses a plastic extruder to create 3D shapes in air.  The plastic extruder is one that you would normally see in a 3D printer like the Makerbot, but has been adapted to be handheld.  Because the plastic cools rapidly, it can create sturdy shapes that can be drawn anywhere.

It already surpassed the million dollar mark, so I have high hopes for this project.  I backed it at the $75 October level, so I hope to get mine then and be able to do a review of it.  If you are into 3D Printing and artwork, you may want to consider backing this project!

Another Kickstarter I backed this week is a project for the Raspberry Pi.  It’s an on/off switch that talks to the Pi via GPIO and activates a safe software shutdown before cutting power.

I’ve talked to the creator, he’s a member of the Raspberry Pi forums, and is quite excited about this project.  It’s $22 for this batch of boards.  If you are looking for a power switch for your Pi, this may be it.

I have a cool piece of hardware to show tomorrow.  Looking forward to sharing it with you all!

I want to start this by saying I LOVE Kickstarter.  I have funded many projects, most have succeeded  some have been delayed, some are still in the will it succeed or will it fail phase.  I really like the Kickstarter model.  It’s not a store.  It’s a risk vs reward for the backers, and a way to make the creators dreams come true.  I plan on putting the DeskCade on Kickstarter very soon(tm).

Today I am going to talk about the Pebble Smartwatch.  I backed this many months ago, and it’s an ambitious project.  It was the first Kickstarter project to reach 10 million dollars.  I received my Pebble last Sunday, and I would like to write some initial thoughts on it.

TL;DR Cliffs Notes:  It’s got potential, with a firmware update it will be awesome, but it’s just not there yet.

My out of the box experience with the Pebble sucked.  I was using an iPhone 4S with iOS 5 because they said it was supported.  Well it isn’t 100% supported on iOS 5.  The app gets stuck trying to talk to the Pebble, and the firmware update that’s available hangs.  iOS 5 will send a notification when you get a call, but no notifications on texts or e-mail.

The next day I updated to iOS 6, and lo and behold, everything worked.  For about 2 hours.  When I sit down at my work desk, I usually take off my watch to code.  When I stepped away for a bit, nothing worked anymore.  I had to re sync the Bluetooth connection, turn off notifications and then re-enable them for it to work again.  And then I walked away again and it happened again.  It’s a frustrating issue that I know will be fixed in a firmware release.  It has too for this product to be successful.  I has to just work..

One other software gripe:  Please put a battery indicator and a charging indicator somewhere on the screen.

The build quality is amazing!  Even though it’s only plastic, it feels solid and tough.  The screen is very easy to read.  The battery life so far has been great.  The charger has a very Apple Magsafe connector feel to it.  You place the charger on the side of the pebble and the magnets pull it into position.  As a watch, it’s great.

This is going to be a great product.  I have no doubt.  Once they get the kinks out of it on the software side, I’m never going to take it off.  I’ve seen it work.  It has the potential to be a paradigm shift in wearable computers with it’s SDK.  I have high hopes for the creators.  I want to be able to back more of their ideas.

On a side note, PiMAME 0.6 is in the works.  I’m hoping to release it next week.  Te latest edition of Raspbian came out last week.  I tried moving over to that, but it’s still slower than the older release of Raspbian I’m using.  It also seems to require a bigger SD card as it’s just hitting the 2GB limit.

I’m going to continue using the older Raspbian, I’m putting in a start-up menu so you can access frequently accessed items, and I’m working on making the image smaller so there aren’t as many issues with temperamental SD cards.